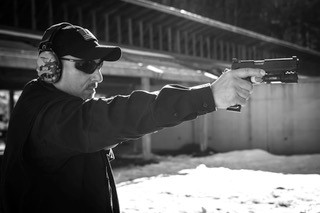 There are legitimate reasons to carry a knife for work, everyday tasks even self-defense in extremis. Some will not or, cannot carry a knife due to non-permissive environments. Having a basic working knowledge of how to defend yourself against an adversary with an edged weapon in an emergency is certainly an asset. This class will cover the basics of grip, deployment, angles of attack, and defense along with the pros and cons of a folder or fixed blade. If you have an EDC blade bring it and if you have a matching trainer it would be ideal to bring it as well.
The Assistant Instructor will be Sensei Louis D’Agostino of Modern Samauri of Fresh Meadows, NY.
Sensei Lou has been a student of Aim Small for 5 years and has taught this segment several times in the past years.

Sensei Lou D’Agostino has been training in martial arts for over 30 years and teaching for 25.  Lou operated Modern Samurai for 23 years.  Sensei Lou holds 6th Dan black belt in Taekwondo, 3rd Dan in Japanese swordsmanship Toyama Ryu, 3rd Dan Batto-do, equivalent rank in his main samurai sword art Shinkendo, and is an authorized International Shinkendo Federation instructor under Toshishiro Obata.  Sensei Lou has cross-trained in other arts including; jujutsu judo Filipino stick and knife.  Lou has been a strong advocate of self-defense training for many years and was fortunate to train under Phil Messina NYPD Sgt. Ret. founder of Modern Warrior for over five years.  Steve Tarani has been a very strong influence and most recently the work of Kelly Worden from afar.   For the past decade, pistol craft has been a big part of Lou’s life and the past two have been occupied shooting USPSA and is currently ranked B in carry-Optics.

Payment is Required in Full for all students 2 days prior to course start to facilitate an on-time start.

Equipment Needed
Extra magazines
200 rounds of ammo
Pants with belt loops and sturdy belt.
Duty/ Carry handgun with holster and 100 rounds of ammunition if you have.
Standard Hip holsters that fit the handgun. Inside the pants, holsters are appropriate if they hold their shape as there is considerable drawing from the holster.
Appropriate range attire including safety gear and good footwear for movement. NO FLIPFLOPS, SANDLES, WORKOUT CLOTHING,